Just outside the busy slot machine casino where we had breakfast we enjoyed this inspiring quote by Theodore Roosevelt: Far better it is to dare mighty things, to win glorious triumphs, even though checkered with failure, than to rank with those poor spirits who neither enjoy much nor suffer much, because they live in the grey twilight that knows no victory or defeat.”

Far better it is to dare mighty things, to win glorious triumphs, even though checkered with failure, than to rank with those poor spirits who neither enjoy much nor suffer much, because they live in the grey twilight that knows no victory or defeat.” —Lolo, MT.

Over breakfast, Paul, Terry and I had discussed the coming ride. Our guide describe in detail the narrow, winding roads, the ever increasing number of salt carriers and logging trucks using the road. They also go to great lengths to talk about the difficulty that Lewis and Clark had getting over Lolo Pass. Just after breakfast we found an informational sign that shared how Lewis and Clark endured terrible hardships getting through the rough terrain up ahead. It even went so far as to say that they didn’t have any guides to help them through as few of the local tribes used the pass through the mountains. Courageously undaunted, we forged ahead. We only made it a couple of miles before our bike path ended with no warning forcing us to retrace our steps and blaze another trail. With bike paths ending willy-nilly, it is no wonder that Captains Clark and Lewis had such a hard time getting up the trail.

One of about a dozen signs describing how much difficulty Lewis and Clark had in this area. —Lolo, MT. 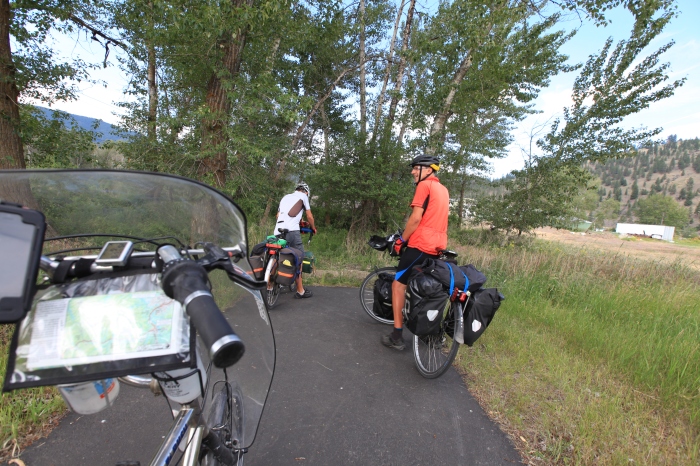 This bike trail ended in a grove of trees, with a gully between us and the road. We nearly gave up hope of ever finding a path to the Pacific. —Lolo, MT.

The trail itself was stunning. The mountains here are much more heavily wooded than the higher elevations in Colorado, Wyoming and Southern Montana.  We wound our way up to Lolo Pass, slowly making our way past a rushing river.  At one point, we witnessed the devastating impact of a large wildfire that had spread through here a few years ago.  Next to every burnt out building was a new construction replacing what had been lost: a testament to the hardy spirit of the Western Montana folk who live here.

The road up to Lolo Pass, MT.

As I neared the pass, a large tractor-trailer rig was pulled over at the side of the road, clearly having mechanical difficulties. As I cycled past at walking speed I asked the driver if I could give him a tow. Terry pointed out later that it was a good thing the driver had such a good sense of humor as he could have taken my smart-ass comment in a different light. About an hour later as I sat eating my lunch at the visitor center, the trucker, Ryan, came over to get some water. He had been able to jury rig a broken coolant line and needed to fill his waterproof boots to with water to transfer to the reservoir on his rig. I was able to offer him my pliers so he didn’t have to use the drinking fountain. I’m glad I was able to help him out as I felt a little guilty about my unhelpful comment earlier on the mountain.

Ryan fills up his boots with water to transfer to the coolant reservoir on his truck at the Lolo Pass Visitor Center on the MT-ID border.

Leaving the national forest center, we crossed the state line for Idaho, our penultimate state. I’ve now biked from the Atlantic Ocean to the Pacific time zone, which is pretty cool. My ride down the mountain was wicked fast as usual, with speeds generally in the mid-30 MPH range. I almost whipped past a little turnoff for Devoto Cedar Grove, but stopped at the last moment. The grove is devoted to Bernard DeVoto, who had spent much of his life interpreting the journals and history of the Lewis and Clark expedition. I can see why he loved this place so dearly, some of the trees are hundreds of years old. The pine needles and ferns cover the ground in a thick loam that deadens all sound except the river bubbling past nearby. I took an hour to sit in silence here and enjoy the beauty and peace of this little corner of creation

Goodbye Montana. Like all wildlife, this bear only likes presenting its ass to the camera.

The view on the Idaho side of the Lolo Pass. 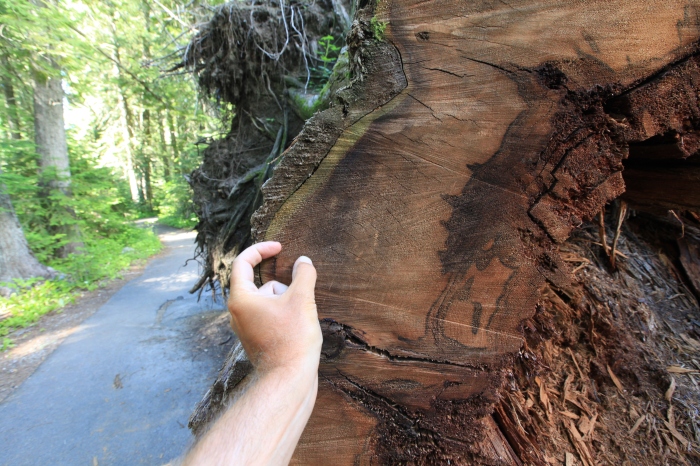 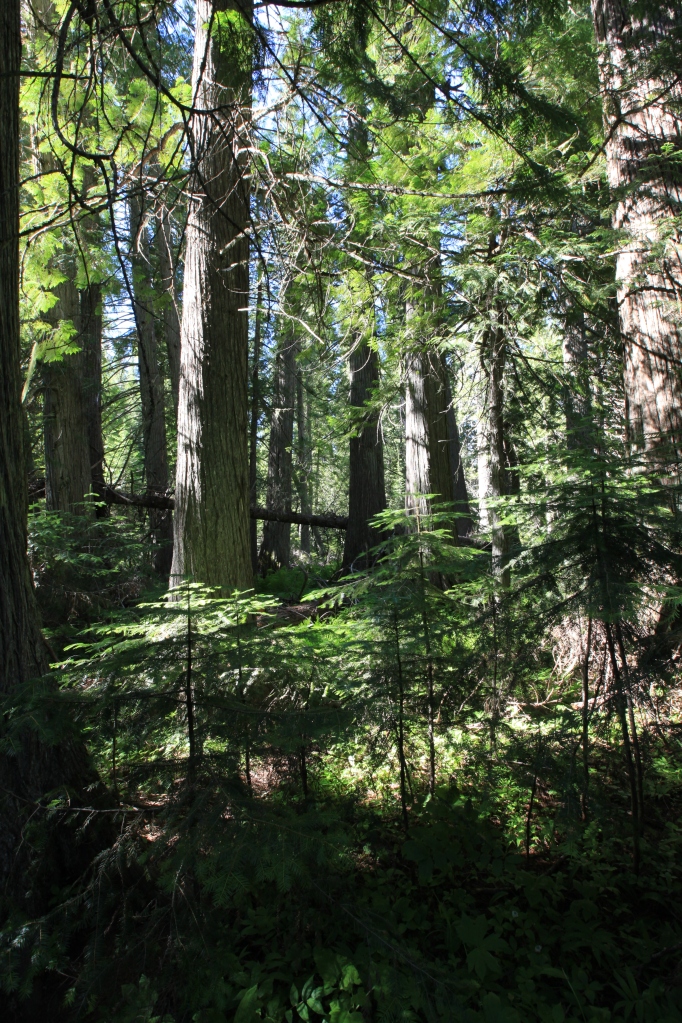 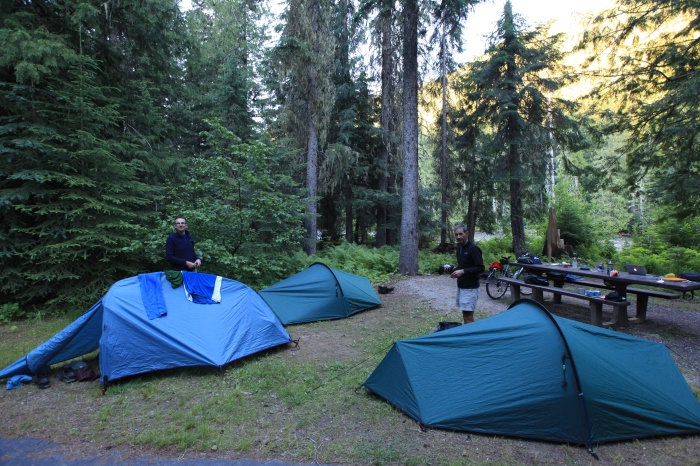 Our campsite at Whitehouse Campground is among the most beautiful and peaceful of the trip. —Clearwater National Forest, ID

Posted on August 1, 2014 by Mike Evans in Bike Touring