This trail isn’t done with me yet. Today’s ride was to be seriously challenging. Two 2,000+ ft passes through the Ochoco mountains. Temperatures over 100 degrees for the eighth day running. No shade, and little opportunity to replenish water. Fortunately, the Presbytrian church of Dayville where we slept last night also supplied us with a full kitchen and as much pancake mix as we could eat. Which was about 5-6 pancakes each. 🙂

By 5:30 AM, we were fueled up and rolling. The foothills of the Ochoco Mountains are carved through by beautiful gorges revealing mesmerizing rock strata. The mountains and buttes present sharp relief against the clear morning sky. The whole of the scene is kissed by the sun rising behind our backs as we pedal ever closer towards the Pacific. 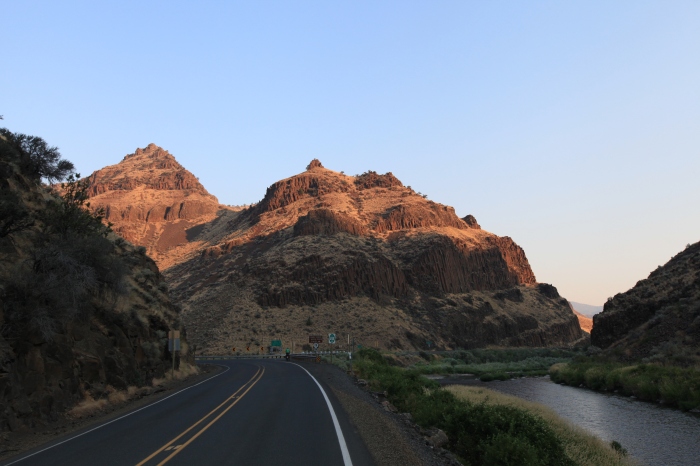 The climb up to Keyes Creek Pass, OR.

A shoe tree on the climb up to Keyes Creek Pass, OR. Paul thought this might be a memorial to a runner’s life cut short. I think Paul is a bit morbid.

As we approached Keyes Creek Summit we met a trio of cyclists starting their journey across America headed East. They had the “young buck” sort of swagger about them that said nothing could possibly stop them on their journey. As our conversation progressed we were humbled to find that at the end of each day they had been enjoying a bit of rock climbing. Further, on the previous day, they climbed one of the buttes near the town of Mitchell, just a few miles ahead to look at the fire.

Wait. What? The fire! What? How did this come up at the end of a 15 minute conversation?

“Oh yeah”, they said. “They closed the road just after we got through”

Completely freaked out, I uttered a quick goodbye with the intention of getting to Mitchell as quickly as possible and find out what’s what. Finding the general store, I sauntered inside to inquire. The gentleman behind the counter resembled the ghost king from Lord of the Rings. True to form, he informed us:

“The way is shut. We do not suffer the living to pass”

Paul described this ghost as “really helpful” because, being properly English, the closest he is allowed to come to insulting someone is to praise them with maximum sarcasm.

Fortunately, some other folks in town were much more willing to give wildly contradicting reports. Among the various speculations were timeframes for the road to open, how far down the road the fire was burning, where the roadblocks were, which side roads were closed. There are zero, two, or four cyclists already at the top. Cyclists are waiting on the far side.  Lightning started the fire. Coyotes started the fire.  A salamander spontaneously combusted. Every piece of information we received was in conflict with another. The only consistent data point: the road is definitely closed because of a very real forest fire. 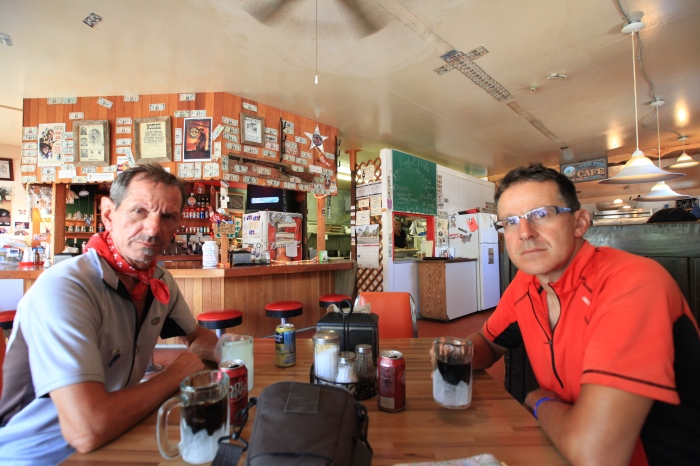 Having just heard about the closed road and fire, the Brits adopt a stance of steely determination in the face of adversity. One might go so far as to say they planned on keeping calm. They might even carry on. –Mitchell, OR.

Thinking logically through our options, we realized that we needed to get up to the road block to get real information. Further, if a small window to get through the area opened, we needed to be on station to take advantage of the opportunity. As we worked through the decision, a firefighter headed back from the pass confirmed that the road block was 15 miles up… nearly at the top of the pass. This implied that once we got up there we might be staying for a while. We loaded up with six liters of fluids each in case our buddies Jerry and Jonathan were stuck at the top.

Arriving at the roadblock, we got the real skinny. Jonathan and Jerry had arrived about 12 hours earlier and were waiting out an opportunity to get across. They had turned down a ride in a pickup truck from Oregon Dept of Transportation in order to preserve their perfect bike only record. I’d already wrestled that demon myself (and lost), so I let it be known in no uncertain terms that I’d be happy to take a ride if one became available. Paul and Terry said they’d stick it out until morning, waiting for a window to bike through. If no window opened, they’d take the ride in the truck. We planned on meeting up at the first campsite past the roadblock. 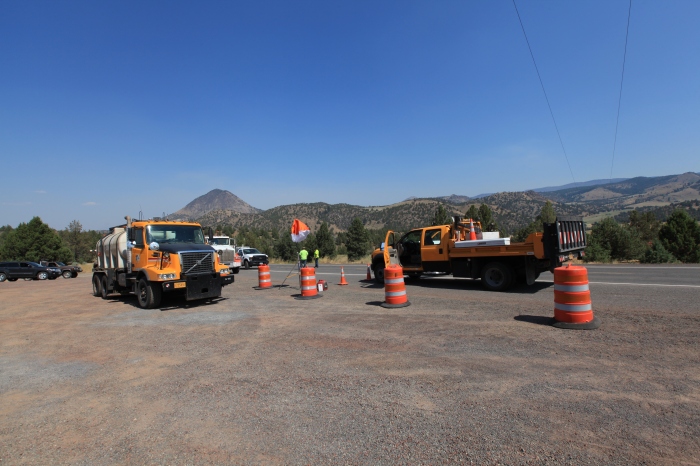 The roadblock approaching Ochoco Pass, OR.

The roadblock approaching Ochoco Pass, OR.

To get a sense of scale of the smoke plume: the plane in this picture is a massive four engine monster that drops flame retardant powder. –Ochoco Pass, OR.

Over the next few hours, the fire flared up as the afternoon winds fed it. Every agency involved in fighting the fire came over to tell us we should really think about another option. The US Forestry department, Oregon forest fire fighting department, Bend city fire department, Oregon department of forestry and Oregon Dept of Transportation all chimed in with prognosis that we should “go back”. Going back involved 180 extra miles of backtracking through areas that might also flare up in the next few days. It quickly became apparent that the ODOT guys were the only ones who would give us a ride. It also appeared that once the fire moved onto National Forest land the US forestry department would take over. They were not interested in having bikers near the fire and would either force us to go back down, or worse, evacuate us leaving the bikes behind.

On the change of shift for ODOT, the workers headed back across the pass to the West to get home offered me a ride. To say that I thought it would be a good idea to get the heck out of there is an understatement. We got Perspehone loaded up in the back and started towards the fire.

ODOT workers giving me a ride through the pass. Ochoco Pass, OR.

From the first bend the smoke intensified, and I could see signs of previous burnouts. The real danger to bikes had been the possibly of a “hazard tree” falling on the road long after it had burned. Lots of chainsaws and big trucks are required to clear this danger, and evidence of heavy equipment abounded. Mike, who was driving the truck, took a deliberate pace as we wound our way up the mountain past this evidence of recent fire.

The smoke intensifies as I ride up towards the pass. –Ochoco Pass, OR. 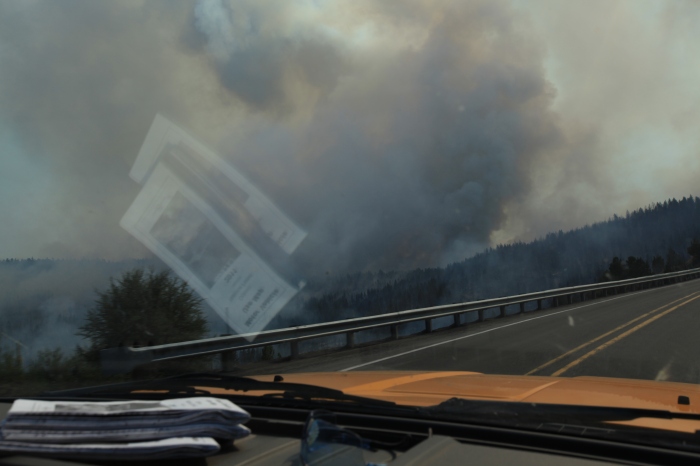 The smoke intensifies as I ride up towards the pass. –Ochoco Pass, OR.

The fire has already burnt through this area. –Ochoco Pass, OR. 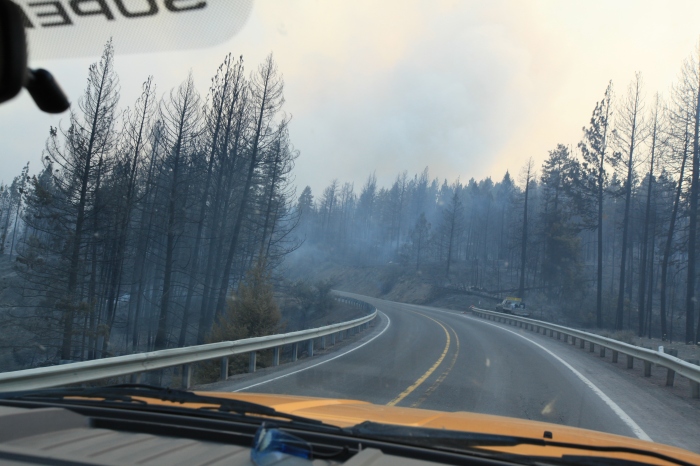 The smoke is intensifying over the road. –Ochoco Pass, OR.

In the words of Ron Burgundy: Things escalated quickly.

A sudden shift in the environment around the truck signaled entrance into a very active forest fire. The smoke became very dense, to the point of difficult breathing. I began seeing isolated burning stumps and branches among the mostly spent forest trees. Then suddenly we were entering a full on blaze. Mike apologized that he wouldn’t be able to slow down for me to take pictures. I almost reached over and slammed on the gas for him in response. Get me the hell out of this hell.

Flames are still burning in this area. –Ochoco Pass, OR. 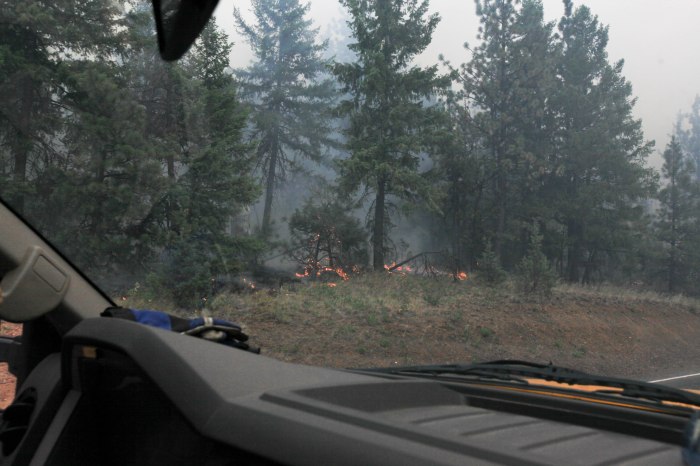 Shit is getting real. –Ochoco Pass, OR.

The entire adventure played itself out in reverse as I left the most active area of the blaze. Phrases like “lost containment lines” and “insufficient helicopter resources” now had a much more significant meaning to me. Also, it became clear that there was zero chance the other four were going to bike through a wildfire. Even if the liability issues weren’t there, there was simply too much smoke. 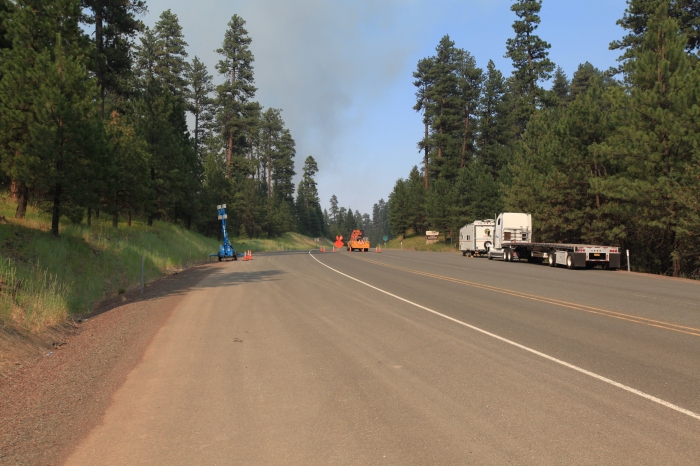 Through the fire. Phew! Thanks ODOT!!!

I reached the other end of the roadblock intact if a little shaken. I thanked the ODOT workers profusely then started down the 20ish mile road to the next campsite. At around 7:00 I finally got some mobile signal and talked to my brother, Steve, who went online to check for further fire issues to the West of me. Lots of fires still burning in Oregon, but my path straight West is likely to be free of flames.

About five hours later the Brits showed up. Warnings at the top had gone from bad to worse, and they figured it was best to accept the offer of a ride from ODOT. Team Pie Bomb (Jonathan and Jerry) have decided to turn North and try to scout a way 100-200 miles around the fire. Both decisions are good ones, and I understand the reasoning of TPB. But I’m ecstatic the Brits have joined me this morning and we’ll be able to continue our journey to the Pacific together. We’re down to 260 miles left. Less than 6% of the trip. One more mountain and then it is all downhill to the sea.

Through the fire. Phew! Thanks ODOT!!!

One thought on “Day 71: Wildfire!: Dayville, OR to Ochoco Lake, OR”