The joy of today’s four mile 1200 foot decent is incomparable to anything I’ve experienced in life before. Today I felt alive, joyful, and ecstatic. But to get there I had to journey through tired, sore, determined, sweaty, scared, and intimidated. Much like a tough hill, let’s start with the challenging part and then get to the payoff.At 5:33 AM we were pedaling down the road. Our best start yet. We turned on to highway P at Ozara, Missouri. Bill called it Ozara, Misery and I don’t think he was far off for some of today’s tough hills. Highway P has been the subject of much trepidation for riders in front of us on the TransAm because of the big orange sign saying “Highway P Closed 5 miles ahead.” Fortunately, five separate riders spread out over the 3 days in front of us on the trail have blogged that they were able to get through by either being waved on, or traipsing through the mud next to the bridge under construction. I write this in detail for the riders behind me so that they can rest assured that highway P is passable. 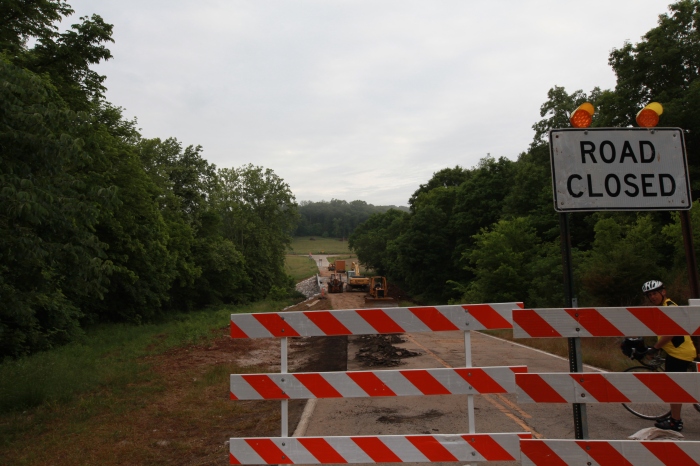 HIghway P is very passable. Pay no attention to the signs and barriers.

The Ozarks are stunningly beautiful. Rolling hills gradually give way to rolling mountains. Pastoral scenes abound. For some reason, Bill really likes mooing at cows. Loudly. Often. Loudly. I’m grateful as the chuckles helped get me over several crests early in the day. Only 20 minutes into the ride I was dragging. I walked an early hill, and generally had a hard time finding my energy. Bill’s light spirits eventually percolated into mine and after a little while we were cruising up and down hills swiftly. Apparently every touring cyclist compares this section of the trip to riding on a roller coaster. Every single one of them is correct. Thrilling downhills turn into 75% of the next uphill. I passed 40MPH about half a dozen times today. Woohoo! 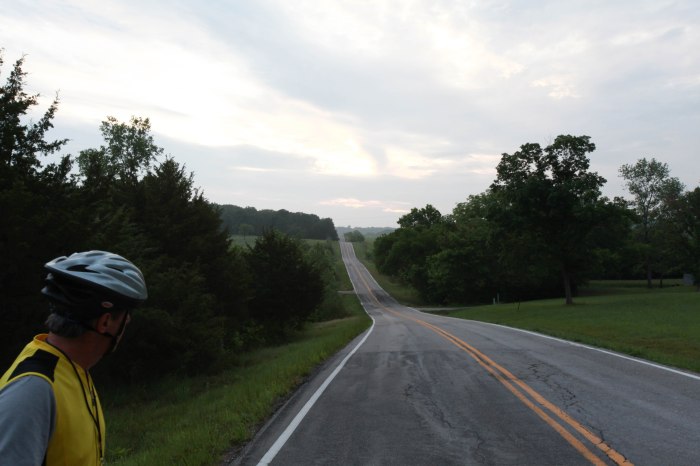 A tough, but rewarding morning got us into Farmington where Jess and Tuan were graciously waiting for us at Bauhaus Kaffee. Since we get up at a horribly early hour, this worked out great. We ordered ridiculous amounts of food and I had a 20oz americano. Caffeine. Oh, how I have missed your sweet chemical wonderfulness. We also met Rachel and her dad (who’s name I forgot. Sorry!), a father and daughter team who are doing an eight week tour of Missouri state parks. I had been reading their blog for weeks in preparation for my own trip, so I was a little star struck to meet them in person. They are truly wonderful people. 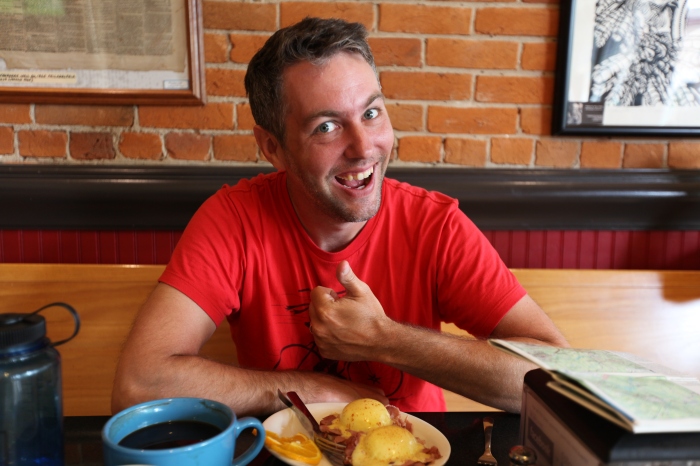 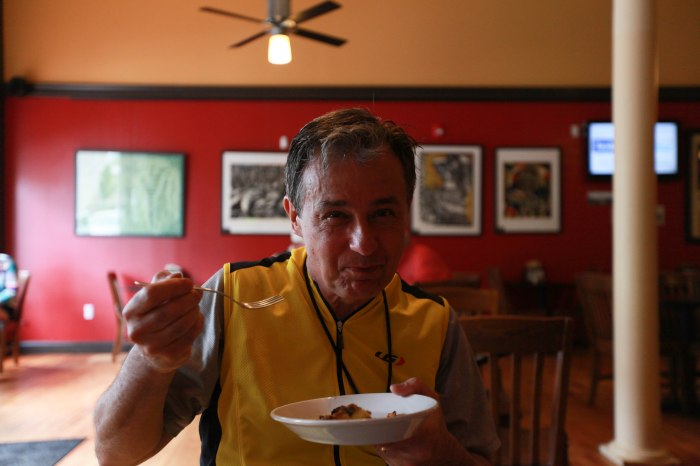 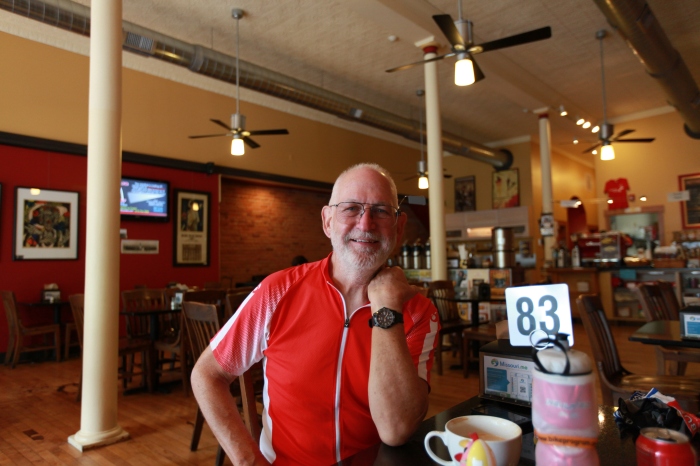 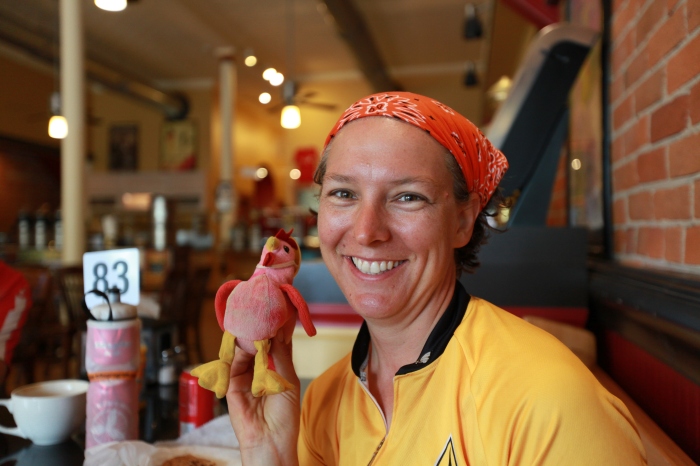 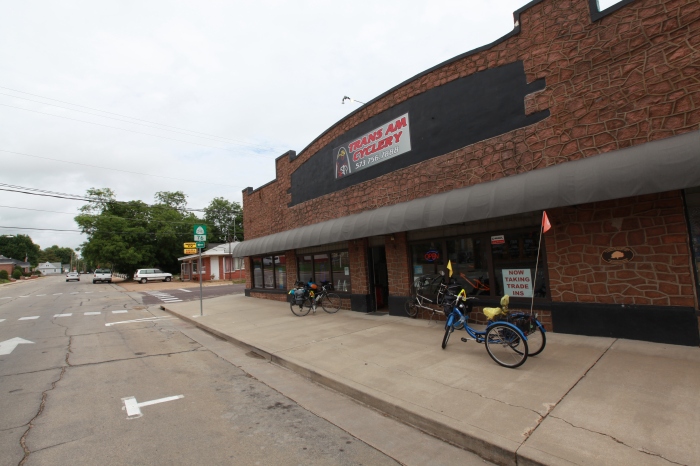 Quick repairs at the TransAm Bike Shop in Farmington, MO

The next 30 miles were some of the toughest riding of the trip. Long ascents. Steep ascents. Long and steep ascents. Over mountains and through the woods in grandmother gear we go. The real doozie was a long ascent to 1400 ft. At the very top a pack of 4 dogs gave chase. Each of us had a different technique for dealing with the pooches, and the interaction of these techniques nearly spelled disaster. Fortunately the dogs didn’t have the bite to match their bark and we all came through unscathed.

And then the payoff. A massively long descent through mildly windy roads with little traffic. It was magical. It was wonderful. We whooped and huzzahed. We hollered and cavorted. It was pure joy powered by an endorphin and caffeine overload. Amazing. 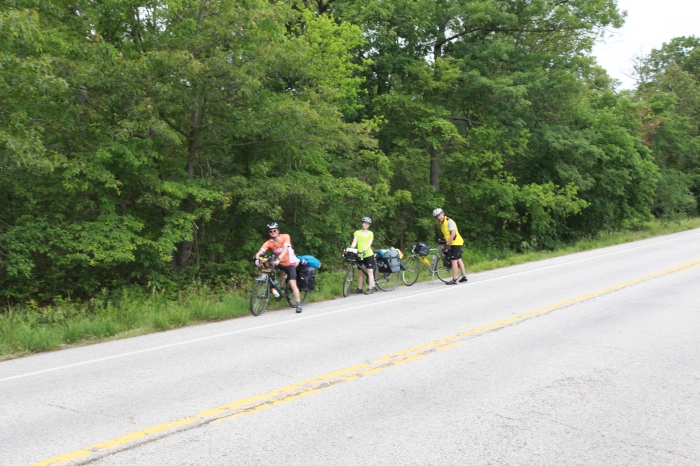 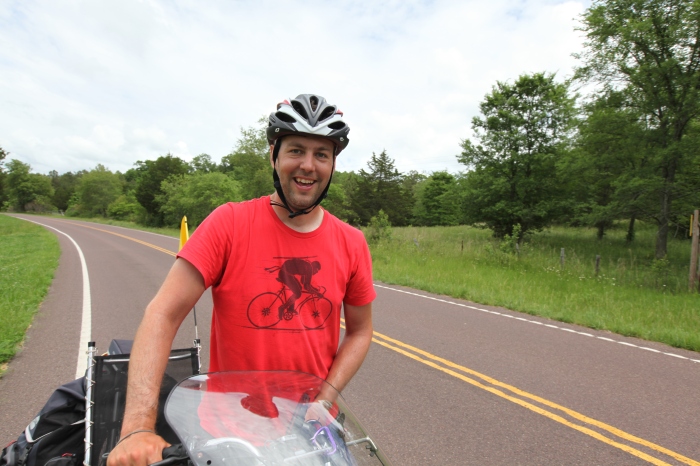 At the end of the descent, around the 65 mile mark we parted ways as Bill and I turned into a state park to get a cabin and some eats. We leisurely made our way over to the food store and grabbed whatever was on offer. We scoffed at the idea of counting calories and just grabbed whatever looked good. Which was literally everything in the store. I mean literally. I almost ate a napkin. Finally, we moseyed over to the cabins to check in around four o’clock.

After about 90 seconds of self pity we psyched ourselves up for a late afternoon ride. A one-bar cell phone call to the town of Centerville confirmed that a small inn had room available. I asked the innkeeper if she needed my name for a reservation. She said ‘nah, don’t worry about it’. I worried about it. Very much.

Oh! Zarks! The next 15 miles was very challenging terrain. I have no idea how Bill managed to conquer miles 205 to 220 on just his third day since joining me through some of the steepest hills of the journey yet. Tenacity. Grit. Determination. The guy is a machine. I’m blown away.

About two miles from town as we climbed our 797th big hill of the day, Bill yells up to me, “moderately rugged!” in reference to the descriptor from the ACA maps. To which I reply. You know what: the guy who wrote that description is a total A#@HOLE! Bill started laughing so hard that he almost fell off his bike. I joined in, tears streaming down my face. We had to stop for five minutes as we just laughed and laughed and laughed.

We’re in town now, and looking forward to a short, but aggressively hilly day tomorrow as we finish out the tough section of the Ozarks and begin to look forward to the plains of Western Missouri and Kansas.